One trick in managing a Surname DNA Project is to minimize the importance of the surname and concentrate on the DNA itself while always keeping the project in mind. Yes, there are those who are certain they're the real McCoys, the real Cooleys (not so much anymore), or Akins. But, as described in the last article, part of my joy in doing this is the inevitable busting of stubborn myths, and driving, as best as possible, toward truer origins. And after all, "Origin" — as a philosophical, scientific, artistic, and spiritual quest — is a primary point of reflection for our species; at least once the issues of food, shelter, and safety are set aside. We then become concerned with propagation, not just of the species, but of our cultures and livelihoods. All genes and memes, as it turns out, have origins. Our surnames, which are a sort of meme, do serve as guideposts for finding recorded documentation. The genetic record, however, allows us to arrive closer to the source. To be sure, there is value in myth and meme, but they're best explored in one's spare time while taking care that, in the pursuit, we don't muck with the evidence. This hobby is about solid evidence and the process in which to acquire it.

I rarely come across the term anchor SNP. Although I'm unable to find a clear definition, it appears to be most often used for genetic research that goes much deeper and is more academic than we lowly surname genetic genealogists are concerned with. For example, I find it mentioned in an article titled "Mapping of homoeologous chromosome exchanges influencing quantitative trait variation in Brassica napus." Yep, but not worth citing.

I employ a very simple and specific application for the term: An emergent Y chromosomal mutation, a SNP, born at a specific place, at a specific time, and in a specific man. (A SNP itself is the revealing of a specific mutation, say from A to T, at a specific location on the Y chromosome.) For example, Jeremiah Strother was born in 1655 at Old Rappahannock County, Virginia along with the first appearance in his lineage of Y13302, the only known SNP of the subclade of the same name, R1b-Y13302. We know this from the Big Y testing of members of upstream haplogroups. Jeremiah's father, William, and three of his brothers did not have it, whereas all of his living patrilineal descendants do. (These graphics, by the way, do not represent eighth notes and triplets, nor are they guitar chord diagrams.)

Remarkably, descendants of Jeremiah's son Francis, through two of his own sons, demonstrate that Francis was also born with a novel variant, now called A20343. The Y-700 product from FTDNA has shown that, on average, SNPs came into a lineage at a greater rate than previously suggested. Still, I would think, new subclades occurring in successive generations will continue to be rare, at least at the level of testing now conducted. Nevertheless, this is what we have: Jeremiah was the first to be born with Y13302 and his son the first born with A20343, markers that have since propagated through all succeeding male-lineage generations.

The two men under Jeremiah at the far right haven't been identified. But they (or he, or one or more of the other sons) are certain to be from Jeremiah as only he is a known source for Y13302 and its antecedents. Kit #608983 is rich in novel variants so I hold out hope that an additional son will be genetically identified. (Jeremiah had, I believe, at least five sons.) We can rule out Francis because the A20343 SNP is lacking in these testers. The next sons can't wholly be ruled out, but they're also relatively rich in SNPs and do not appear to line up with the mystery kits, except that they too have the Jeremiah SNP. (Kit #152639, also having an unidentified connection, does have SNPs belonging to the third listed son.)

For some perspective, here's the complete SNP table for this haplogroup, R1b-BY24824. The immigrant ancestors of the Strothers (R1b-BY23497) was William Strother who died in Virginia in 1702. I'd be surprised if an anchor SNP will be attributed to him, but we have nine candidates to parse out. There are certainly more surnames involved — and I'm on the lookout for them. The mystery men are indicated by the red wavy line.

Whether or not an anchor SNP is achievable at any node on a tree, the goal is to triangulate to a specific ancestor in order to obtain a precise Y-DNA print from him. We have that for the founder of the Strother lineage, but it might not be unique to him simply because we lack a SNP that is anchored directly to him.

Such anchoring cannot be done with any certainty with STRs. An anchor SNP, however, provides researchers with a concrete point of analysis. It provides the time and place from which all subsequent subclades flow. For more distant ancestors we need to work to gain that information through the study of history, geography, and archaeology. It's here that we begin to brush shoulders with population geneticists.

As far as I know, these are the only two (self-defined) anchor SNPs I've come across during my eight years of administrating surname DNA projects. There are plenty of sorta kinda anchor SNPs buried deep into the fog of our collective history. But triangulation is the key, as is a wider study beyond the narrow scope of our personal genealogies.

To get an idea as to the distance that needs to be traversed to flesh out this group and its genealogy, below is a table of all R1b-BY24824 testers in the project who have had their Y-111 sequenced. The genetic distance (GD) is calculated by the differences among the STR markers and is shown tester by tester. The Strothers and Butlers constitute a well-defined box while the Struthers, Reids, and Allisons are outside it, beginning with a GD of an additional 5 from the modal and are roughly equally distant from one another. My question is, at what point will the Strother family blend into the Struthers? 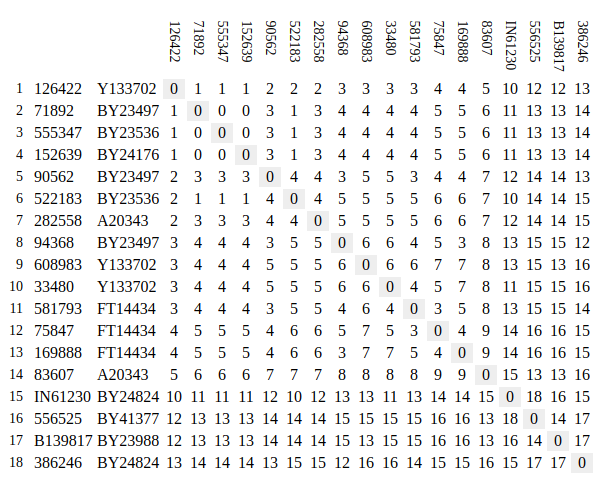 Additional reports for this group are found at http://dna.ancestraldata.com/Strother/.